For eight years, the terrorist group, Boko Haram has orchestrated attacks that have been devastating for the residents of Northeastern Nigeria, and their weapon of choice slowly graduated from radicalized Muslim youth to kidnapped, unwilling young girls.

According to UNICEF, more than 110 children have been used as suicide bombers since the start of the year, with at least 76 of them being girls. Most were under 15 years old. One girl blew herself up along with a baby strapped to her back.

And no matter what our politicians would have us believe, Boko Haram is not degraded or slowed down, we’ve merely become desensitized. This year alone, militants have carried out more than twice as many suicide bombings than they did in all of 2016, and the attacks keep coming. And for the girls they’re using as weapons, life is bleak.

Dionne Searcey of The New York Times interviewed 18 girls who were captured by Boko Haram militants in Nigeria and sent into crowds to blow themselves up. And while the world around them sees them as evil – advertising materials against terrorism now feature images of girls with explosives tied to their chests and paints their families as Boko Haram collaborators – the story that Dionne tells is undeniably one of bravery. 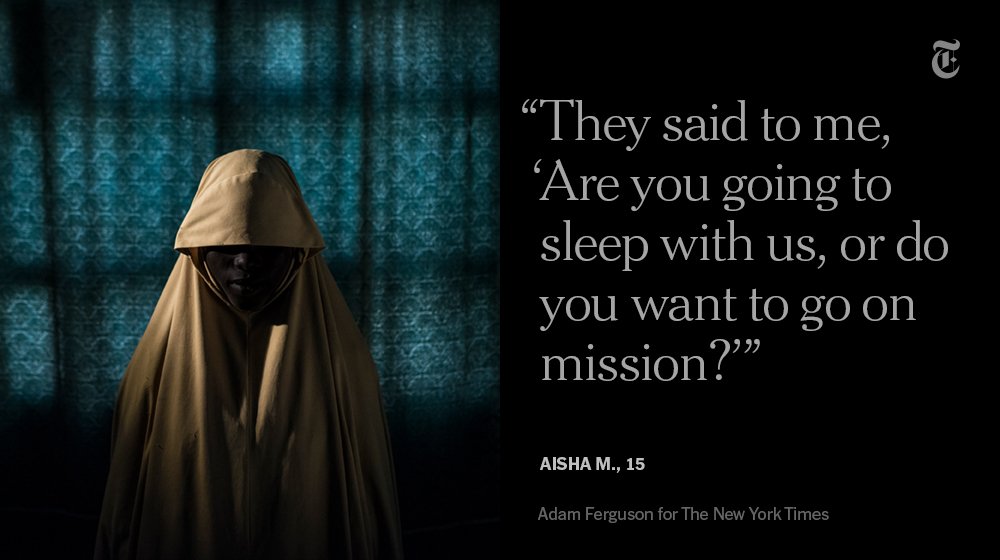 (Photo: Dionne Searcey/Adam Ferguson/New York Times)
The girls’ accounts shatter the narrative often perpetuated by officials. Far from being the willing participants they’ve been portrayed as, the girls described being kidnapped and held hostage, with family members killed during their capture.

All of the girls recounted how armed militants forcibly tied suicide belts to their waists, or thrust bombs into their hands, before pushing them toward crowds of people. They were told that their religion compelled them to carry out the orders, but all of them resisted, preventing the attacks by begging ordinary citizens or the authorities to help them.

“Aisha, 15, fled her home with her father and 10-year-old brother, but Boko Haram caught them. The fighters killed her father and, soon after, she watched them strap a bomb to her brother, squeeze him between two militants on a motorbike and speed away.

The two militants returned without him, cheering. Her little brother had blown up soldiers at a barracks, she learned. The militants told her not to cry for him. “He killed wicked people,” they told her.

Later, they tied a bomb on her, too, instructing her to head toward the same barracks.”
Like the other girls, Aisha considered walking off to an isolated spot and pressing the detonator, far from other people, to avoid hurting anyone else. Instead, she approached the soldiers and persuaded them to remove the explosives from her body, delicately.

Other girls, whose full names are also being withheld out of concern for their security, had similar stories of terror and defiance. 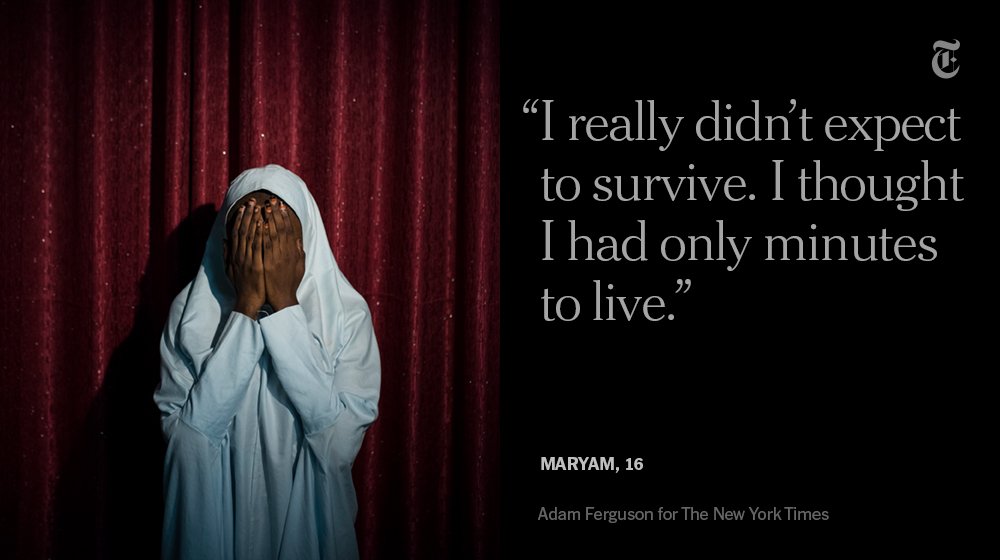 (Photo: Dionne Searcey/Adam Ferguson/New York Times)
For these girls and others, even approaching the authorities to ask for help was exceedingly dangerous. Soldiers and civilians at checkpoints are on high alert for anyone suspicious – and usually that means any woman or girl – a lot of women and girls in the north wear long head scarves and garments that could cover an explosive belt. Worried about being shot by mistake, many women and girls squat before approaching checkpoints, hoping to convince nervous soldiers and civilian militia members that they aren’t wearing explosive belts or vests.

In the last three months of 2016, 13 children from aged 11 to 17 were killed after they were wrongly thought to be suicide bombers. These children, these girls? They’re heroes, and the government needs to do more to protect them.

Why I had sex in open beach – Actress Juliet Ibrahim

BBNaija: Alex reveals what Bambam tells Teddy A to do for...

Did You Know You Can Detox Your Armpit?